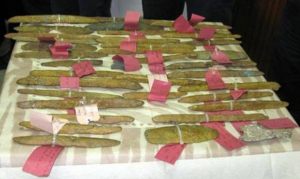 According to Professor Sebastiano Tusa, an archaeologist at the office of the Superintendent of the Sea in Sicily, an archaeological team working on an ancient wreck off the southern coast of Sicily has raised a large number of ingots of a rare metal known as orichalcum – a substance mentioned by Plato as the legendary sacred metal used in Atlantis to sheath the walls of temples. Media reports do not quote Tusa as explaining why or how the encrusted ingots are being identified as Orichalcum. 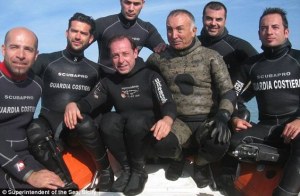 The find was made in little more than 10 ft of water some 1000 feet from the shoreline of the town of Gela in southern Sicily. Analysis of the metal shows that it is an alloy of copper, zinc, lead, iron and nickel. Ancient accounts describe orichalcum as an alloy of silver gold and possibly copper–and for this reason the identification of the ingots has yet to be fully explained. The Archaeology Hour is seek an interview with Prof. Tusa and these questions may be answered then.